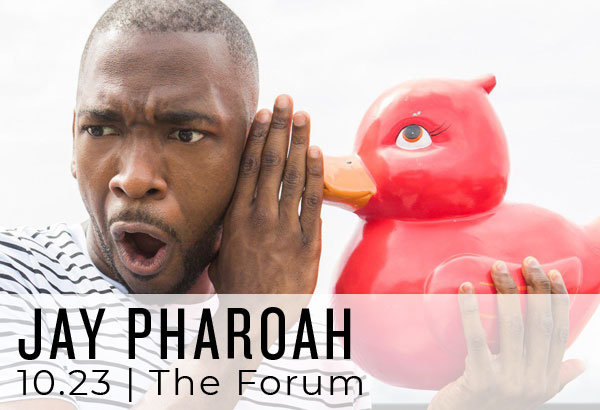 Something Funny is Going On in Harrisburg: Harrisburg University Presents Jay Pharoah at the Forum Auditorium

The stars were shining bright at the Forum Auditorium in Harrisburg last night and, for those of you familiar with the room, I’m not talking about the illuminated ones that adorn the constellations on the ornate ceiling. The aforementioned star is Saturday Night Live alumni, Jay Pharoah, who kicked off Harrisburg University Presents new series of events at the Forum in grand fashion on Wednesday, October 23, 2019.

Frank Schofield, Director of Live Entertainment and Media Services at HU Presents, aims to bring world-class entertainment to the region on a regular basis. He wants to do this for two reasons: because the students and residents of Harrisburg deserve to see this caliber of act, but also to draw people to Harrisburg as an entertainment destination. Case in point, last night’s show was free entry to HU students and faculty, a fact that certainly wasn’t lost on all of the undergrads in attendance. As expected, the show also drew in comedy fans from as far away as Philly who were thrilled to see Pharoah on the bill in this classic venue.

After some brief remarks from Schofield and Harrisburg University Dr. Charles Palmer (who echoed Schofield’s comments that this show was “about giving back to the community”), the show kicked off just after 8PM with opening act, AJ Foster who wasted no time in comparing himself to the paid advertisement you’re usually forced to watch before viewing a YouTube video, “The difference is, you can’t skip me after five seconds”.

This was my first time seeing Foster, who hails from the South Bronx, and he not only held down the opening spot, he owned it. His keen observations about College life played well for the University students in attendance and his 30 minute set didn’t just warm the crowd up, it had everyone in stitches. There were no theatrics or bells and whistles to his set, just relatable everyday situations presented with his witty timing and colorful use of language. You can’t force funny, however finessing it is Foster’s forte. I am looking forward to seeing him again; the guy definitely has the chops for his own comedy special. You can find more from him @JusCallMeAJ. I just call him funny.

I was familiar with headliner Jay Pharoah’s shtick from SNL and stand-up prior to the show but this was my first time seeing him live and he did not disappoint! Pharoah is known, in part, for his spot-on impersonations of other famous men and he ran the gamut on Wednesday night, tackling everyone from Jay Z to Shaq, Barack Obama to Bill Cosby. One impersonation I didn’t get to see was a fan having a great time at this show… no impersonation was needed. Everyone in attendance laughed unrelentingly for the entirety of Pharoah’s 80 minute set.

Pharoah commands the stage, drawing in fans with his keen observations and then engaging with their bursts of laughter orshouted comments (and there was no shortage of either on Wednesday evening). He undertook a slew of current topics ranging from Donald Trump, to death-metal music, to sex with older women. Comedy, when used properly as it was on Wednesday evening, can unite us. For two hours the room was filled with folks who forgot about their cares and stressful days and just laughed. And the fun is just getting started.

Get used to it Harrisburg. This is the caliber of talent that HU Presents will be bringing to the area on a regular basis. In his pre-show remarks, Schofield announced an upcoming show at the Forum with alt-rock band, The Revivalists. This will be the first show ever at the Forum Auditorium with a standing room pit on the floor for fans (in place of seating). More new shows are being announced soon and until then Harrisburg can look forward to upcoming acts including Grace Potter (November 15, The Forum), Rodrigo y Gabriela (November 30, The Forum), and George Clinton (December 1, XL Live).