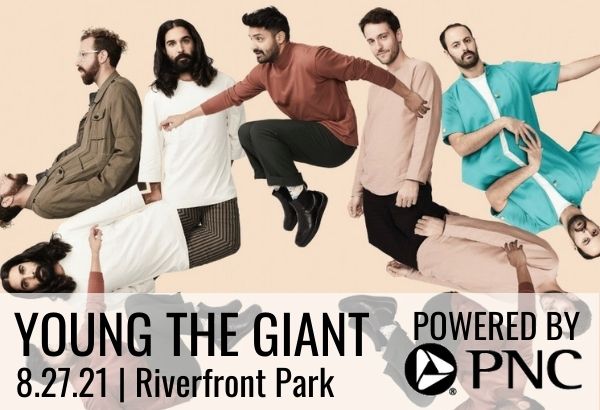 GET TICKETS
Ruless, Regulations, and Map

The fourth album from Young the Giant, Mirror Master is a layered meditation on identity in modern life, an emotionally charged look at the dangers of illusion and possibilities of freedom. “Within one single day, we’re all so many different people,” says Gadhia, lead vocalist for the L.A.-based band. “Especially with the use of social media, we’re not just living in the now—we’re living on several different timelines simultaneously. At a time when everyone wants to put each other in a box—culturally, socially, musically—we wanted to show that there are a multitude of reflections inside everything. We don’t have to be a certain thing; we can contradict ourselves and show all these different sides of who we are.”

Mirror Master arrives as a continuation of Young the Giant’s Home of the Strange, a 2016 album that found the band members shedding light on their shared experience as immigrants or first-generation Americans. But in a departure from the externally focused Home of the Strange—Mirror Master shifts perspective and joins in the post-election reckoning faced by so many Americans. With the influx of social media use and public attention to cultural issues in the country, people have been forced to see how their actions, both good and bad, are reflected. “This record takes a lot of the concepts we explored on the last album but plunges them inward,” notes Gadhia. “It’s about being okay with yourself, especially in light of what’s happened in the world in the last two years, and realizing that there’s something beyond that duality of right and left, black and white. The space in-between is infinite.”

The 2021 Harrisburg University Summer Concert Series at Riverfront Park is Powered by PNC and supported by Dauphin County Commissioners and Comprehensive Financial Associates.