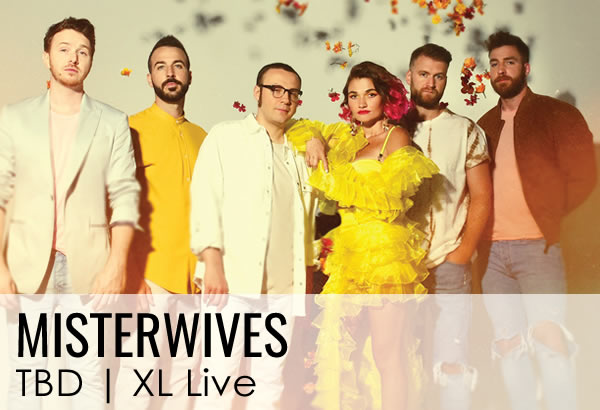 Get Tickets Now
MisterWives are an indie pop band based in New York City. Formed in 2012 around the core trio of singer/keyboardist Mandy Lee, bassist William Hehir, and drummer Etienne Bowler, they have an unusual sound that combines elements of synth pop, folk, and indie rock, falling somewhere between the quirky dance-pop of No Doubt and the pastoral folk-rock of Of Monsters and Men. After adding guitarist Marc Campbell and multi-instrumentalist Dr. Blum, the group began recording its debut EP, Reflections, which was released on New York indie Photo Finish Records in early 2014. With just one EP and some demos to their name, MisterWives garnered much buzz among major music publications like Interview, Paste, and MTV Buzzworthy. Their debut LP, Our Own House, was released in February 2015. After spending much of 2016 on tour with Panic! At the Disco, MisterWives returned in 2017 with their second album, Connect the Dots, which featured the single “Machine.” Dots entered the Billboard Alternative chart at number 19 and peaked within the Top 200. In 2019 the group inked a deal with Fueled by Ramen, which they announced with the release of the single “WhyWhyWhy.”