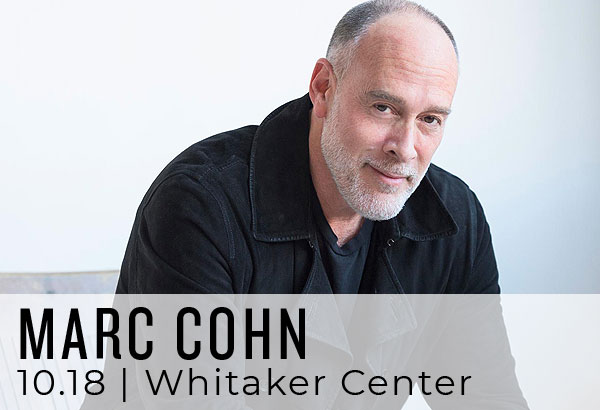 It was 7:45 pm on Friday, October 18, 2019, and the lobby of the Sunoco Performance Theater at the Whitaker Center was filled with couples and groups of people ranging from early childhood to late retirement age. Some came in jeans and t-shirts, some in more formal attire, but all were eagerly anticipating Grammy Award-winning Marc Cohn’s first show in Harrisburg since 2014.

Before Cohn could captivate the audience, Amy LaVere and husband Will Sexton walked on the minimally decorated and simply lighted stage. Based in Memphis, TN, LaVere and Sexton play “Americana” music, which is a blend of classic country and southern soul. They have opened for Cohn at various shows in 2019 when he wasn’t playing with the Blind Boys of Alabama – who he collaborated with on the recent album, Work to Do.

LaVere is a singer-songwriter and player of an upright bass, which stretched more than a foot past her long, curly dark hair. Dressed in a black dress, LaVere impressed the audience with her slightly raspy voice that was at one moment sweet, the next sultry. Sexton, accompanying his wife on guitar, was dressed in cowboy hat, khaki colored jacket, and jeans. LaVere sang several songs, including “Big Sister”, which had the audience laughing several times, especially with the line calling her sister “a tramp”. Later, she thanked everyone for having a sense of humor.

After their 20-minute set and a brief intermission, Amy Warner from The Glenn & Amy show on The River 97.3, and Frank Schofield, Director of Live Entertainment and Media Services at Harrisburg University (HU), walked on stage to greet attendees and introduce Marc Cohn.

Schofield is relatively new to his role at HU, but not to the music scene. An 18-year veteran of I Heart Media, he came on board with the university to “bring world class music and higher-end entertainment on a regular basis to central Pennsylvania.” This includes the Death Cab for Cutie show that he brought to the Harrisburg riverfront on June 19, 2019, which he credits as his biggest achievement with Harrisburg University Presents to-date.

“It was a really big team effort with HU, Dauphin County, the police, and others,” he said after the Cohn show. He went on to say he is looking forward to upcoming shows like Grace Potter (November 15) and Rodrigo y Gabriella (November 30).

Cohn walked to the center mic and immediately began singing “Dig Down Deep” from his 1991 self-titled debut album. He then walked to the piano, and with his deep, slightly raspy voice sang another song from his first album, “Ghost Train”. Pacha joined him on back-up, his voice sounding similar to Cohn’s, but of a higher octave and less gravely. This song helped set the tone for the night – the audience was in for deep lyrics, moving melodies, and soulful vocals.

Before Cohn’s third song, “Don’t Talk to Her at Night” from his 1993 “The Rainy Season” album, he chatted with the audience about being on the road so much, and not always recognizing a venue he’s been to before, but that the little lights on the Sunoco Theater’s balconies triggered great memories from his last performance there five years ago. The venue is indeed a memorable one, with not a bad seat in the house. Even from the last row of the orchestra section, there was an unimpeded view of the stage, with the vocals and instruments ringing out clean and clear. The same could be said for those in the side boxes and mezzanine level.

Cohn was not all songs and seriousness. He got the audience laughing with a joke about how his two failed marriages combined are much shorter in length than his brother’s lasting marriage, which was the inspiration for the next song, “Perfect Love”. This sleepy, romantic song is typical of the American singer/songwriter style and clearly means a lot to him. With lyrics like, “Well, they had their share of hard times, too. But whatever they were, they never let it get them down… And only one thing remains the same, whoa. Ooh, yeah, yeah. Just a perfect love,” you can tell he admires his brother’s luck.

As Cohn wrapped up the song, LaVere and Sexton stepped on stage to sing backup on the 2019 title track, “Work to Do,” which Cohn typically sings with the Blind Boys of Alabama. Cohn shared a story about how gospel music is infused throughout many of his songs, and then he dropped the f-bomb, to many laughs. While this version of “Work to Do” lacked some of the rich soul normally brought to it from the Blind Boys, LaVere’s sweet soprano voice added new dimensions to the song.

Cohn’s storytelling continued with a longer tale of a New York City cab ride some 30 years ago, a talkative cab driver, and a religious pamphlet with fun facts about heaven that led to his next song, “Saving the Best for Last”. Cohn’s voice was breathy, and his piano playing deep and melodious, as he sang about mansions created by angels and traveling a hundred miles per second.

He went straight into the next song, “Listening to Levon,” from his 2007 “Join the Parade” album. This song was written as an apology to an old girlfriend who was trying to talk to him while he was distracted by Levon Helm of The Band on the radio. The organ music, albeit a bit too loud at times when compared to the vocals and other instruments, added that gospel element for which Cohn is so well known.

Pacha switched quickly from the organ to keyboard and started singing lyrics from “Silver Thunderbird,” one of Cohn’s most well-known and loved songs from his debut album. Many claps and cheers went up from the audience, and some sang along to the final chorus, although Cohn had to encourage them to sing louder. He tried to encourage more audience participation with some energetic call-and-response to the line, “Me, I want to do down,” and then asked if they wanted to hear anything “out of the ordinary.” Song titles were called out, including his most well-known, “Walking in Memphis,” which he said he would play soon, and another that he joked, “I wish I could remember that one.”

He decided to play “Living out the String,” followed by “Walking in Memphis,” to the greatest applause (and phones up recording the song) of the evening. It was a stripped down version of the original, with Cohn slowing down the lyrics and piano notes, making it sound less Top 40 and more soulful. Those changes, along with the lack of female gospel singers in the background, changed the feel of the song, which might have disappointed some in the audience. But overall, Cohn was able to take something he is well known for – to the point of being accused of being a “one hit wonder” on occasion – and breathe life back into a song that he has, no doubt, tired of playing at times.

Cohn got up from his piano then and walked to the center mic with coffee cup in hand. He thanked the audience, Harrisburg University, LaVere and Sexton. He slung his guitar over his shoulder and played “One Safe Place,” which was a simple and stripped down song. Then he bowed and hugged his bandmates as the audience stood, clapped, and cheered for “one more.”

Some audience members left at that point, to their detriment, as Cohn came back on stage for three encore songs: “True Companion,” “Walk Through the World,” and after the house lights went up, “29 Ways”.

“True Companion,” another of the more well-known songs from his debut album, is one of those songs that would be perfect for a first dance at a wedding, with lyrics like, “So don’t you dare and try to walk away, I’ve got my heart set on our wedding day, I’ve got this vision of a girl in white, made my decision that it’s you alright.” And “29 Ways” – a cover song originally performed by Willie Dixon in 1956 – was the most upbeat and rocking of Cohn’s songs that night. His toe was tapping, the audience was clapping, and everyone in the theater gave a standing ovation as Cohn ended the show.

As everyone filed out, the mood was elevated. They knew they had seen a show that was very personal, with Cohn opening up his heart and soul for all to see… and hear. At least some small part of Cohn’s three decades of song-writing will remain with those who heard him long after they left the theater.