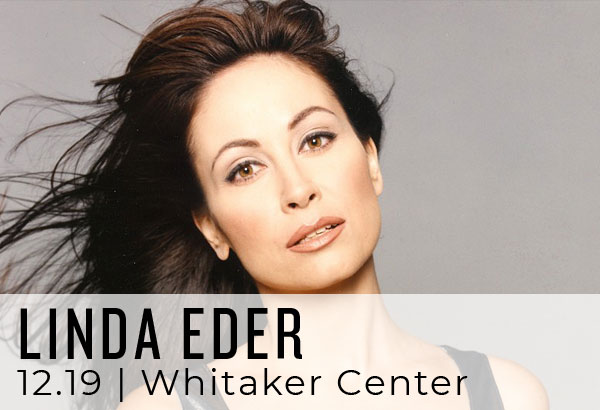 Get Tickets Now
Showcasing one of the greatest voices of our time, Linda Eder’s diverse repertoire spans Broadway, Standards, Pop, Country, and Jazz. When she performs “live” in concert, it is amazing to experience the ease with which she moves back and forth from one genre to another as if she were gifted with the vocal ability to perform each genre as well as all the others.

She has appeared on television numerous times. TrailMIX, her prime time Animal Planet special about singers with a passion for horses, was a natural extension of her love for animals and featured Linda interviewing fellow recording artists and performers Sheryl Crow, Mary Chapin Carpenter, Irish tenor Ronan Tynan, Rob Thomas, and Aerosmith’s Joe Perry. She has been featured on numerous PBS television concert specials including Clay Aiken’s Tried & True, Hallelujah Broadway, Linda Eder: The PBS Concert, Best of Broadway: Broadway The Leading Ladies, Best of Broadway: The Love Songs, Jim Brickman Plays The Disney Songbook, and more. Her 2001 Holiday Concert, Christmas Stays the Same, was broadcast on Bravo TV and continues to be a popular selling DVD.

The concert stage remains the mainstay of Eder’s career. She has performed for sold-out crowds in venues across the country and throughout Europe. She has performed at many prestigious venues such as Carnegie Hall, Kennedy Center, The Palace Theatre, Radio City Music Hall, Wolftrap, New York City’s Town Hall, Davies Hall, among many others. Always touring in great company, her collaborators have included the late Oscar-winning composer and pianist Marvin Hamlisch, Emmy and Grammy winner Michael Feinstein, and conductor of the Boston Pops Keith Lockhart. Eder is happiest on stage singing for her audiences and spreading the joy she exudes.