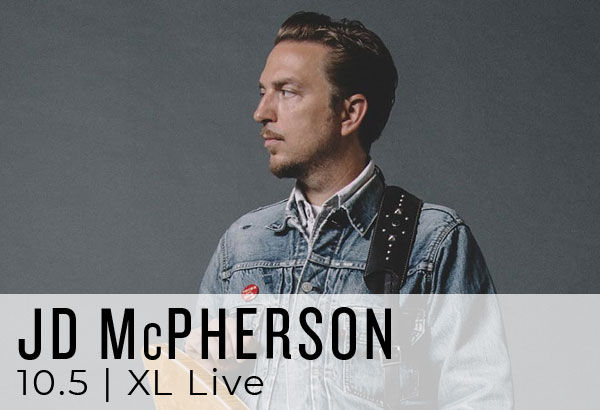 As a visual artist, Broken Arrow, Okla., native JD McPherson is well versed in the process of working within clearly defined formal parameters, and he employs a similarly rigorous discipline with his music. On Signs & Signifiers (Rounder, April 17), McPherson’s seductively kickass debut album, produced by JD’s musical partner, Jimmy Sutton, this renaissance man/hepcat seamlessly meshes the old and the new, the primal and the sophisticated, on a work that will satisfy traditional American rock ’n’ roll and R&B purists while also exhibiting McPherson’s rarefied gift for mixing and matching disparate stylistic shapes and textures.

“There are little subcultures within the roots scene, where people are really into rockabilly, traditional hillbilly stuff or old-timey music,” JD points out, “but there aren’t a whole lot of folks making hard-core rhythm & blues hearkening back to Specialty, Vee-Jay or labels like that. That’s what Jimmy and I really like, and our only intention going in was just to make a solid rhythm & blues/rock ’n’ roll record. But I didn’t want to make a time-machine record, so we tried to make something relevant but with all the things we love about rock ’n’ roll and rhythm & blues and mesh it all together. We both have eclectic tastes; Jimmy likes the Clash as much as he likes Little Richard, and I like the Pixies, T.Rex, hip-hop and all kinds of stuff. So we came up with a couple of weird songs and put them on the record, hoping that it wouldn’t scare off any of our ultra-selective fanbase.”

JD needn’t have worried. It’s highly unlikely that even the most discerning listeners would guess that the arrangement on his cover of Tiny Kennedy’s R&B chestnut “Country Boy” incorporates not only the tambourine beat of Ruth Brown’s 1955 Atlantic single “Mama, He Treats Your Daughter Mean,” but also Raekwon and RZA’s “abstract, out-of-tune piano loops” on Wu-Tang Clan’s innovative ’93 LP Enter the Wu-Tang; or that the mesmerizing churner “Signs & Signifiers” is powered by an unchanging tremolo guitar figure modeled on Johnny Marr’s part on the Smiths’ “How Soon Is Now.” Then there’s “Firebug,” which JD “wanted to sound as if Stiff Little Fingers had recorded at Del-Fi Records.” And while it may not have been specifically what McPherson and Sutton were going for, the haunting dreamscape “A Gentle Awakening” seems to chart a course from “Heartbreak Hotel” through Terence Trent D’Arby to Amy Winehouse.

Never has an album of so-called “retro” music been laced with such a rich payload of postmodern nuance. But that was precisely the intent of what JD describes, only half-facetiously, as “an art project disguised as an R&B record.”

“It’s weird,” says Sutton, “when you grow up being a fan of ‘older’ music and all of a sudden you’re making a record, you’re thinking, are we just recreating something—a museum piece—or are we actually bringing it forward? It’s interesting, because if you make something today and it moves you today, in that sense it’s contemporary. I like that juxtaposition of classic and fresh, something old yet new that can actually take you somewhere now.”

Of course, pushing the genre envelope doesn’t work unless the artist has the chops and feel to capture the form in its pure state to begin with. Check out, for example, “Dimes for Nickels,” McPherson’s vital evocation of the very moment when R&B and hillbilly music had a baby and they called it rock ’n’ roll, or the Jackie Wilson-meets-Elvis exuberance of “Scratching Circles,” or the lascivious ecstasy of the Little Richard doppelganger “Scandalous,” (although the “gold-capped tooth” reference in the first line is lifted from the Leiber-Stoller Coasters classic “Love Potion #9”). But for all we know, these tracks, too, may have been secretly embedded with elements from far afield, their stylistic twists hiding in plain sight. This cat is wicked-clever—and man, can he ever deliver this righteous shit.

McPherson took a circuitous path to get to this point. Broken Arrow butts up against Tulsa, a cultural oasis in the Heartland that has long been not only a musical hotbed but also a bustling center of the contemporary arts. “Tulsa’s got a lot of resources for people who are into weirdo art,” JD points out. And he gravitated toward it. “I did my undergraduate studies at the University of Oklahoma in experimental film,” he says. “I wanted to paint, do installation, make video art, performance stuff, sculpture. I’ll bet I’m the only person to have received graduate credit hours in card magic.” He wound up with an M.F.A. from the University of Tulsa in open media, a discipline designed specifically for his interests and ambitions.

But all along the way, music was an integral part of McPherson’s life. His dad introduced him to Delta blues and jazz as a kid, and after getting into Hendrix, Led Zeppelin and punk rock during high school, he picked up a Buddy Holly box set. “Something about that scratched an itch,” he says. “Then I started getting into the black side of rock ’n’ roll: Larry Williams, Little Richard, Art Neville’s stuff on Specialty, then soul and Jamaican rocksteady.” While studying visual arts, he also played in bands, doing everything from punk to western swing. JD was still scratching that itch when he recorded some originals with his previous band and took a shot in the dark. Well aware of Sutton’s status as a heavy hitter on the roots scene and the leader of R&B group the Four Charms, he fired off a MySpace friend request and asked if the producer/bassist would listen to his demos.

“I get sent stuff all the time, and it’s always the same,” says Sutton, “but I checked JD out and there was definitely something there. He wowed me—his voice, his songwriting. So we started talking, and we were always on the same page about the music we dig and where we wanted to take it. He had great ideas but he was still an open book. I was just trying to push him to stay true to himself. So the idea became to create a record that was honest and live.”

Six months into their budding partnership, JD arrived at Sutton’s newly completed home studio in Chicago—a sort of working shrine to all-tube recording as it was practiced a half-century ago, right down to Jimmy’s collection of vintage mics and his early-’60s Berlant/Concertone quarter-inch tape machine. Also on hand was Sutton’s go-to guy Alex Hall, “a Brian Eno type” according to JD, who multitasks as engineer, drummer and keyboard player.

“I showed up and I said, ‘I got this song ‘Dimes for Nickels,’ and I want it to be like a Chess Chuck Berry thing, slowed down, with a flat-tire beat,’” JD remembers. “Jimmy and Alex are from Chicago—they know that stuff backwards and forwards—and we nailed it in two takes.” Within a week, they’d banged out a dozen tracks, recording during the day and writing at night with a guitar and a laptop.

In order to make sure the album got heard by JD’s potential core audience, Sutton threw some chum in the water, pressing up a limited run on his brand-new Hi-Style label and directing it at the roots community. JD and Jimmy, who’s also a visual artist, then applied those skills to the making of a striking video for opening track “North Side Girl,” which has now registered well over 350,000 YouTube views.

“When the album came out, we immediately got a really strong response from that crowd,” JD recalls. “Then we put that video out, and it went all over the place within a week. Not too long after that, we started getting calls from managers, prospective booking agents, and it turned into this weird journey. By early last year, we were talking to some major labels and the folks at Rounder, who found out about us from the video. What made it the perfect storm was, as all that was happening, I lost my job—I was a middle school art teacher. I loved that job but, sign of the times, they started laying off the art department and I was part of the fallout. So I collected my paycheck through the summer and toured.” After which he signed with Rounder.

JD has no doubts about the viability of the choice he’s made. “Working within a genre has been done in all kinds of mediums—look at Alfred Hitchcock,” he points out. “It’s been established that rock ’n’ roll is a viable form—it’s hard-wired into American brains to understand swinging blues stuff. So it’s not surprising to me that kids are into the Black Keys and Adele. It just had to be presented to them.”

So now it’s JD McPherson’s turn to step up to the plate and give it a good whack. Go get ’em, tiger.