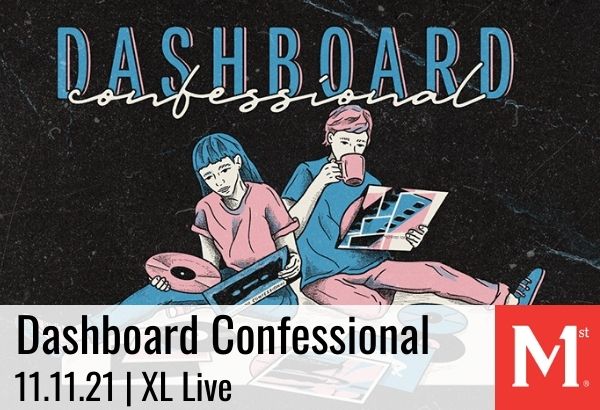 Dashboard Confessional is an American rock band from Boca Raton, Florida, led by singer-songwriter Chris Carrabba.  The name of the band is derived from the song “The Sharp Hint of New Tears” off their debut album, The Swiss Army Romance.

Dashboard Confessional’s first recording was the 2000 LP The Swiss Army Romance, initially a solo side project of Chris Carrabba while he was in the band Further Seems Forever. The following year, Further Seems Forever, with Chris Carrabba, recorded its debut album, The Moon Is Down. Carrabba left the band before the album was released to record and release his second solo album, The Places You Have Come to Fear the Most, and a follow-up EP, So Impossible; both were released under the name Dashboard Confessional.

By 2002, three other musicians had joined Dashboard Confessional. After the success of his second album, Carrabba was asked to perform on MTV Unplugged, and the subsequent live release marked the first time many of the songs were recorded with a full band. Also in 2002, the music video for “Screaming Infidelities” won the MTV2 award at the MTV Video Music Awards, beating out Norah Jones, The Strokes, The Hives, Nappy Roots, and Musiq. This video starred Carrabba in both the performance and the storyline. The video was directed by Maureen Egan and Matthew Barry.