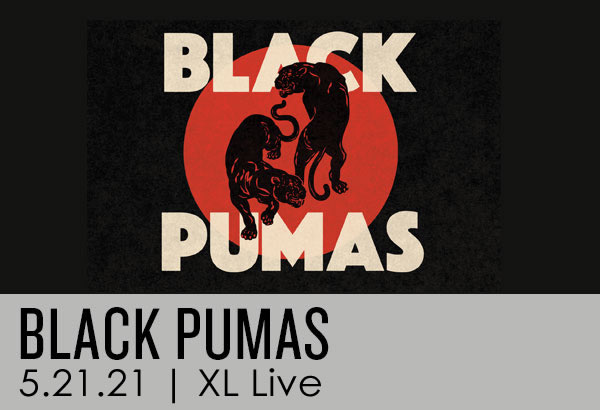 Get Tickets Now
Sometimes, a mystical, life-changing connection can be closer than you think. In 2017, Grammy Award-winning guitarist/producer Adrian Quesada had recorded some instrumentals in his Austin studio, and he started looking around for a vocalist—he knew a lot of singers, but he wanted something different. He reached out to friends in Los Angeles, in London, but nothing seemed right.

Meantime, Eric Burton had recently made his way to Texas. Born in the San Fernando Valley, he grew up in church and then got heavily involved in musical theater. He started busking at the Santa Monica pier, where he brought in a few hundred dollars a day and developed his performance skills. Burton traveled through the Western states before deciding to settle down in Austin—setting up his busking spot on a downtown street corner, at 6th Street and Congress, for maximum exposure.

A mutual friend mentioned Burton to Quesada, saying that he was the best singer he had ever heard. The two musicians connected, but Burton took a while to respond (“My friends were like ‘Dude, you’re a mad man, you need to hit that guy back!’ “) Finally, he called Quesada, and started singing to one of the tracks over the phone. “I loved his energy, his vibe, and I knew it would be incredible on record,” he says. “From the moment I heard him on the phone, I was all about it.”

The results of that inauspicious beginning can now be heard on the self-titled debut album from Black Pumas, the group that Quesada and Burton assembled, which has become one of the year’s most anticipated projects. Described as “Wu-Tang Clan meets James Brown” by KCRW, Black Pumas were the winner of Best New Band at the 2019 Austin Music Awards.

Quesada has a storied reputation from playing in bands like Grupo Fantasma and Brownout, accompanying artists from Prince to Daniel Johnston, and producing such acclaimed projects as 2018’s Look At My Soul: The Latin Shade Of Texas Soul. For the tracks that kicked off this project, though, he had a different direction in mind. “I was looking for somebody with their own identity,” says Quesada, “who liked Neil Young as much as Sam Cooke.”

Burton’s taste, range, and experience proved to be exactly what Quesada was seeking. “We just take to the same kind of music,” he says. “I listen to East Coast hip-hop, old soul music, folk music. When Adrian sent me the songs, it was like I had already heard them before. We were on the same wavelength from the get-go.”

The first day they got together in the studio, they recorded the dusty funk that would become the Black Pumas’ first two singles, “Black Moon Rising” and “Fire.” Quesada had written the music for “Black Moon Rising” on the day of the 2017 solar eclipse, and Burton took that concept and ran with it. “Right away, the hair stood up on the back of my neck,” says Quesada. “I knew, ‘This is it—this is the guy.’ ”